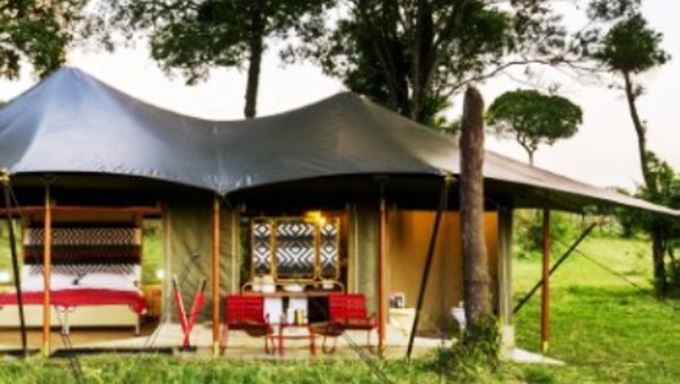 As African travel picks back up, safari companies are creating ultra-bespoke and totally private experiences, giving travelers the freedom to call the shots way out in the wild. I’ve been going on safari for 30 years. For those of us from South Africa, it’s what we do—kind of like how the Swiss ski every weekend—and for as long as I can remember, safari (or, as we say, going to the bush) has meant this: a true adventure in a place where you’re away from civilization, just you and nature, where anything can happen or, sometimes, nothing happens at all. Either way, it leaves you with the most profound connectedness to the planet and its inhabitants.

But like any seasoned safari goer, I know that not every trip to the bush feels like a vacation. There are the rigid game-drive schedules, the pre-sunrise wake-up calls, and, increasingly, the overcrowding. The thickets of South Africa’s Kruger National Park can be as busy as the mall the day after Thanksgiving, and during the Great Migration, the Masai Mara seems to host as many safari vehicles as wildebeests.

Now, as more travelers begin to once again explore the world, the bespoke safari is serving the need for both pandemic-era privacy and the desire for more control. Beyond the obvious benefits of a trip that centers on the beauty of nature and wildlife, total customization promises tight-knit bubbles in which families travel solo to a controlled location with a small and dedicated (and regularly tested) staff. Tour operators who specialize in this kind of trip can also arrange experiences unavailable to the average traveler, tailoring philanthropic efforts to clients’ interests and cutting down travel time with chartered flights that go straight from home city to savannah.

Choose your own adventure

At these exclusive-use retreats, you can handpick your perfect safari.

On a recent trip to Botswana’s Moremi Game Reserve, where I checked in to the new Xigera Safari Lodge (from $2,320 per person per night), I was afforded a rare luxury that all but promised that ideal safari moment: absolute privacy. Xigera’s 12 tented suites can be booked as an exclusive-use stay, but what you’re reserving is more than the run of the house; it’s the opportunity to play camp coordinator—to sleep in rather than rise at some ungodly hour, to skip lunch and stay out on a game drive all day, or to spend an afternoon at the spa if the mood strikes. In other words, to do whatever the heck you want.

One morning at Xigera, instead of zipping off with my guides, Lesh and Mike, on a game drive, I lazed on my balcony with a cup of coffee. At mid- morning, we took an impromptu mokoro ride down the delta, spying red lechwe and water lilies in total isolation.

Another day, I stretched and bent in a private yoga class on one of the lodge’s waterside decks before a late breakfast. Every now and then that old mentality—the insistent bucket list of animal sightings waiting to be checked off—tugged at me. But Xigera’s staff kept my FOMO in check with the three words that eventually became my new safari mantra, whatever you like.

What struck me most, however, was the ability to be spontaneous. One evening, the impulse to see something wild struck me, so Lesh, Mike, and I hopped in a 4x4 and drove off toward the sunset. At that time of day most game drives would be wrapping up, with guests gulping down their sundowners and contentedly being driven back to the lodge for a group dinner.

But as the shadows grew longer and the light dwindled, we were sitting in canvas chairs, me with a glass of champagne in hand, Lesh scanning the plains around us. Then it happened: An impala tore past us, so close binoculars weren’t necessary. In pursuit was a pack of opportunistic wild dogs. It unfolded in front of us like a nature film, with the impala tumbling into a puddle of water, almost losing his footing (and his life!), then disappearing into a thicket of reeds.

My heart was pounding, and the dogs—well, they were left to search for dinner elsewhere. It was the kind of rare sighting full of action and intrigue that would be the highlight of any safari. I was all the more grateful knowing that it was a special moment only for me—no other guests furiously snapping their shutters, no radios blaring to alert other guides to the must-see moment. Just the three of us, taking in the beauty and the rarity of it all.

Xigera is one of a few new camps and estates that cater to private safari groups to bring families and tight-knit pods together in the bush. In South Africa’s Sabi Sands Game Reserve, Singita Castleton (from $19,800 per night for up to 12 guests)—the 45,000-acre family homestead of Singita founder Luke Bailes—has recently reopened for buyouts after a renovation that updated its classic style with the addition of a swimming pool, wellness center, yoga pavilion, and wine cellar.

The main house, which sits above a watering hole, is well-suited for game viewing right from its emerald lawn (though the resident field guide is always available for outings by 4x4 or on foot). Afternoon tea under the veranda can often lead to zebra or even big-cat sightings.

Tarkuni Homestead (from $13,530 per night for up to ten guests), in the remote Kalahari Desert, sits at the heart of the Oppenheimer family’s Tswalu Kalahari Reserve. Guests who stay in the five-bedroom villa—which has been decorated with earthy colors and textures and pops of botanical greens—can go on bush walks and horseback safaris and visit one of the meerkat colonies on the 620-square-mile private reserve (the largest in South Africa). Fireside family dinners, cozy overnights under the stars, and spa therapies can all be arranged.

For the family with an adventurous streak, the new Angama Safari Camp (from $4,950 per night for four guests) travels with the wildlife in Kenya’s Masai Mara National Reserve. Its four white-canvas mobile suites can host up to eight guests in just one group on off-the-grid safaris—but with all the trimmings of a five-star hotel, including plush beds and chef-prepared meals. Days are spent watching wildebeests rumble across the Mara while evenings end with s’mores over the firepit.

Show me the way

When you travel with just one private guide, every moment is tailor-made.

On any safari, your guide can play the role of driver, educator, storyteller, and protector all in one. But don’t get too attached: Traveling from camp to camp often means pairing up with a new guide in each location. Luckily, some of the best in the guiding business are beginning to offer private trips that allow travelers to journey across Africa with them on seamlessly planned multicountry itineraries.

A privately guided safari gives guests a chance to connect with their guide, who crafts a whole journey—and that journey is about being able to tell a story.

A do-good guide to Africa

For philanthropic endeavors that make a real difference, these are the names to know Naturally, most safari camps are rooted in conservation efforts, and across the continent, there are thousands of positive-impact initiatives that allow travelers to participate. But when you travel with experts like Nicola Shepherd—founder of The Explorations Company (explorations company.com), which has been planning bespoke safaris for more than 30 years—connecting with a cause on a personal level can become the best part of the journey. “There’s been a huge move toward giving back, but people don’t always know that these opportunities exist,” Shepherd says. “It’s about enriching guests and giving them the knowledge to do it.”

Every Explorations Company itinerary is philanthropically motivated and based around travelers’ interests. Shepherd’s connections with top researchers and charitable organizations make it possible to arrange access to experiences that aren’t available to the general tourist, including microchipping rhinos, collaring lions, and elephants, and supporting communities through programs that bring better education and healthcare services to villages. On one recent trip, Shepherd sent clients to Tanzania to deliver fuel-efficient stoves that will offset the growing level of carbon emissions. On another, she arranged for a family to help build a farm for a nearby village. “This is all serious work—you are part of a project,” Shepherd says. “Clients know that they’re helping hugely.”

There are other one-of-a-kind conservation-focused experiences too. This year will offer small groups the opportunity to venture into Tanzania’s Ruaha National Park to track, dart, and collar lions, leopards, and wild dogs. And in South Africa, at the exclusive-use Marataba Founders Camp where guests can follow in the footsteps of rangers and try their hands at the day-to-day running of the park, whether it’s collaring a rhino or monitoring cheetahs. In addition to spreading awareness and protecting endangered species, these experiences provide monetary support to conservation organizations thanks to donations built into their rates.

Shepherd’s safaris and itineraries including those in Zambia, Zimbabwe, and Botswana are always crafted to clients’ interests so they give “a sense of ownership in something that is really unique, “There’s a sharing and exchange of stories, and I believe that makes the entire experience much more extraordinary.” Shepherd can cater to her guests’ desires—whether it’s a penchant for walking safaris over game drives, a preference for evening drives instead of morning outings, an interest in the mating habits of ostriches, or a favorite cocktail for sundowners.

Other sought-after guides—who are usually booked months in advance— have started making themselves available for multi-destination journeys. Roelof Schutte, is an expert in walking safaris, is currently leading custom trips across eastern and southern Africa. (Schutte guided the film crew for the 2019 version of The Lion King while it was on location.) In Botswana, Super Sande, in the Makgadikgadi Plains, is another prominent guide available for exclusive outings. His clients include some of the world’s top wildlife photographers.

A chartered flight to Africa isn’t just about privacy—it’s about time.

The long haul is always worth it, but private-jet safaris make time for more action on the ground— and less waiting, overnighting, and laying-over en route. Flying privately “gets rid of the hassle and fear around safety,” says Nicola Shepherd, whose company has launched a new program to fly guests to lodges in Botswana, Kenya, and Zimbabwe from anyplace in the world. It also eliminates exposure with exclusive lounges that provide fast-tracked customs and immigration services.

The Explorations Company was one of the first outfitters to fly clients privately to Africa. Founder Nicola Shepherd calls her custom itineraries “off-piste safaris,” freeing up travelers to go straight to smaller areas—anywhere there’s an airstrip—and bypass international airports and the crowds. The Explorations Company is handling in-air logistics too, with its new partnership with Sentinel Aviation.

Chartered flights take up to eight travelers in one group, along with a dedicated crew and guide, through private terminals and smaller airports, where guests can clear immigration and customs on the aircraft. (The company has also debuted a sustainability program to offset carbon emissions.) Once in Africa, travelers can board a helicopter for a swifter journey—not to mention a more jaw-dropping one, with flights.