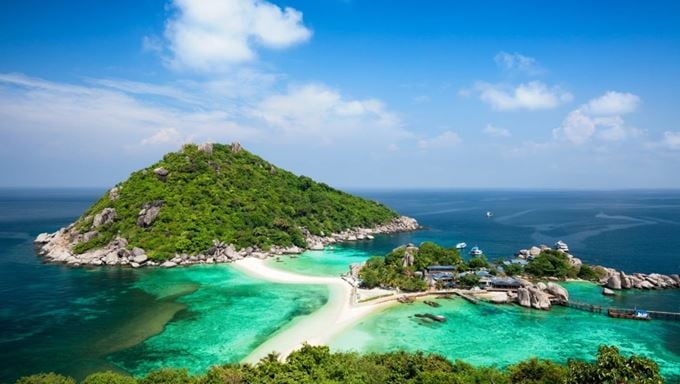 From the jungles of Rwanda to glaciers in Argentina, Pri Shewakramani lists unforgettable experiences that make for picture-perfect memories. We have great pleasure in including the latest Condé Nast article on 23 most insta-worthy, romantic holidays! From dining beneath the stars in the desert in Rajasthan, or viewing tigers on safari, to swimming in secret waterfalls on Sumba island in Indonesia, to glamping in Namibia in the desert, whilst searching for desert rhino and desert elephant, the selection is both eclectic and interesting.

Undoubtedly, the locations are simply staggering! It includes gorilla trekking in Rwanda, visiting the archaeological ruins in Petra, trekking and cycling in Bhutan (which must be one of the most beautiful and spiritual kingdoms in Asia!), to diving amongst sea lions in the Galapagos islands.

It encompasses everything that we can offer, with each journey customised just around you, ensuring a vacation of a lifetime. Throw in our USP, being our philanthropic projects, wherever possible, and it elevates it to an enriching, rewarding, sustainable and uplifting experience! Now, surely that makes sense!

Dine under the stars in Rajasthan

Stay in a Royal Tented Suite at SUJÁN The Serai, a 100-acre private desert estate near Jaisalmer. The suite has its own heated pool, spa, dining and lounge tents. A romantic candlelit dinner can be arranged in the desert under the starlit sky, with live Rajasthani folk music.

When to go: October-March

Swim in a secret waterfall in Indonesia

A 90-minute hike with Nihi Sumba takes you to the Blue Waterfall on Sumba Island. Jump off a 30 m cliff into crystal-clear water. The best part? Your personal butler will be at your beck and call, right from handing you a towel to setting up a romantic picnic with the falls as your backdrop.
When to go: March-June

Enter the magma chamber of a volcano in Iceland

Take a tour inside the magma chamber of the Thrihnukagigur volcano. A one-hour hike through the Blue Mountains Country Park (45 minutes from Reykjavik), or a 20-minute helicopter ride gets you to the base of the volcano and a cable lift will take you down into it so you can explore the chamber and go nuts Instagramming the array of hues that greet you.
When to go: April-September

Namibia’s Skeleton Coast, so named for the number of shipwrecks that line the shore, features a multitude of landscapes – sand dunes, riverbeds and the Atlantic Ocean. Wildlife here includes elephants, hyenas, jackals and desert lions. Stay at Hoanib Skeleton Coast Camp, eight minimalist albeit luxurious tents with floor-to-ceiling windows and shaded outdoor decks. Expect no Wi-Fi or phone network here, as you are truly off the grid.
When to go: June-October

The Celebrity Solstice is one of the more luxurious Alaskan cruise experiences. Expect craft cocktails, live barbecues and an incredible spa. Excursions include kayaking and fishing with the in-house naturalist; see calving glaciers, whales, seals, sea lions and penguins.
When to go: July-August

The Barossa Scenic Heritage Drive in Australia is a gorgeous 57 km journey. Stop along the way at any of the over 70 vineyards to try the variety of offerings (or just to Instagram them if you’re the one in the driver’s seat). Stay at The Louise, set in the heart of the grape region. At the Seppeltsfield Estate, you can taste grape from the barrel of your birth year, while at Penfolds you can make your own grape blend at the laboratory and take the bottle home with you.
When to go: April-May

Point and shoot in Bhutan

Bhutan is one of the most picturesque countries in the world, from the landing in Paro between snow-covered peaks to monasteries set on steep cliffs. Stay at Amankora, which has five beautiful lodges across the country, while your guide takes you to spots off the beaten path.
When to go: March-April and September-October

The Ultimate Petra Experience is a four-day tour of Jordan’s ancient rock city. Your adventure will include experiences such as a private barbecue surrounded by the ruins of Little Petra and a trek to the Ad Deir Monastery. Also on the agenda is a visit to Petra’s most recently discovered site where you’ll hear some fascinating excavation stories.
When to go: September-June

Trek on a glacier in Argentina

If you’re up for a challenge, trek to Perito Morena with Hielo y Aventura, a UNESCO-listed glacier, where the sight of icebergs crashing into the lake below will enchant you. End your day at EOLO Patagonia, a 10,000-acre estancia with all you could ever want.
When to go: September-November and March-May

There are less than 1,000 mountain gorillas left in the world and Rwanda is one of the best places to have a close encounter with these fascinating creatures. After a long trek into the jungle, recover at Sabyinyo Silverback Lodge, a charming cottage in the foothills of the Virungas and adjacent to the Parc National des Volcans. Bookings need to be made well in advance as only eight permits are given per day.
When to go: August-September

Snorkel with whale sharks in Belize

Francis Ford Coppola’s Turtle Inn is located at Placencia, a tiny fishing village on the Caribbean coast of Belize. During the full moon weeks, from March to June, red snapper spawning brings whale sharks just 48 km east of here. Snorkel with these gentle giants for memories of a lifetime.
When to go: March-June

Hunt for white truffles in Italy

Piedmont in north-western Italy is a gourmand’s dream. The region is famous for its white truffles (some of the rarest in the world), cheeses and grape. Accompany a local truffle hunter and their dogs through the woods for an authentic experience. The picking is followed by an aperitivo with white truffles and some local cheeses and meats.
When to go: November

Dive with sea lions in the Galápagos

The area is known to have some of the best diving in the world. Spot sea lions, sharks and turtles at Cousins, a dive spot off the coast of Santa Cruz Island. Book your dives through Scuba Iguana Padi Resort. Stay at the Pikaia Lodge, one of the most luxurious hotels on Santa Cruz, with a restaurant on a volcanic crater and its own fleet of yachts, which can be used to explore nearby islands.
When to go: January-May

Chase the Northern Lights in Finland

The Kakslauttanen Arctic Resort is 241 km north of the Arctic Circle. Stay in the Kelo Glass Igloo, which has a private sauna, fireplace, kitchenette and a bedroom with a stunning glass roof. If you don’t see the lights from your room, rent a snowmobile and chase them on a wildly beautiful journey through snowy forests.
When to go: December-February

Charter a yacht in Greece

Explore islands in the Aegean Sea with your own private yacht from Istion Luxury Yachts. Sail from Athens to the Cyclades islands; watch a glorious sunset at a vineyard in Santorini or party the night away in Mykonos. Explore the lesser-known islands of Ios and Anafi, where white sands, blue waters and quaint villages await you.
When to go: June-September

Live in a castle in Scotland

Inverlochy Castle is in the picturesque Scottish Highlands at the foothills of the Ben Nevis mountain. Modern amenities meet old-world furnishings here (the dining room has furniture gifted by the King of Norway). Outdoor activities include golf, clay-pigeon shooting, fishing, wildlife tours, white-water rafting and deer stalking. Don’t miss the afternoon tea, at which freshly made scones and local jams are served.
When to go: June-November

Indulge your arty side in the Maldives

For couples looking for a little more than endless blue views and the typical island layabout, Joali Maldives opened just last month with an artistic bent. Pick up the resort’s art map and explore the extensive collection, which includes collaborative works with local artisans and the Art Studio & Gallery, which also features changing exhibitions by international artists.
When to go: November-April

Walk with polar bears in Manitoba

Seal River Heritage Lodge is located on the shores of Hudson Bay in the heart of the Canadian Arctic. Getting here is no easy feat, but the opportunity to walk within 100 m of a polar bear makes it worth it. The lodge also offers beluga whale tours and fishing expeditions.
When to go: October-November

Pig out in Tasmania

At Saffire Freycinet, you can watch cooking demonstrations, take a walk around the countryside to sample local ingredients and attend a mixology masterclass. Also on offer is a visit to an oyster farm, where, after you learn about cultivation methods, a table is set out in the middle of the water and oysters are served with chilled grape.
When to go: December-May

Live the Bedouin life in Oman

For a taste of life in the desert, check in to the Canvas Club in the Wahiba Sands for the night. The traditional Bedouin-style tents come with luxurious touches, such as Egyptian-cotton sheets, a private bathing tent with a rain shower and a separate living room. Also on hand is a private chef who bakes fresh bread in the morning.
When to go: September-April

Heli-ski in the Andes

As snow melts in the Northern Hemisphere, head to Chile for the skiing experience of a lifetime. Noi Puma Lodge has access to over 5,100 sq. km of virgin powder in the Andes. Helicopters will take you over breath-taking peaks that will soon be your own private ski slope.
When to go: June-October

Catch your own food in Seychelles

Take a half-day private deep-sea fishing charter from JA Enchanted Island Resort. In some of the richest fishing waters in the world, you might catch some yellow-fin tuna, dorado and wahoo. Back at the resort, the chef will cook up the catch in any way and anywhere you want – be it a private beach barbecue or a poolside Creole dinner at your villa.
When to go: April-May and October-November

Embark on an idyllic sojourn exploring Thailand’s most picturesque islands, rife with verdant jungles, deserted sandy beaches and chilled bars to capture the perfect sunset snap. A two-week island-hopping adventure takes you to buzzing Koh Samui, the serene bays of Koh Tao and to Koh Phangan, known for its mix of yoga retreats and parties.
When to go: February-September