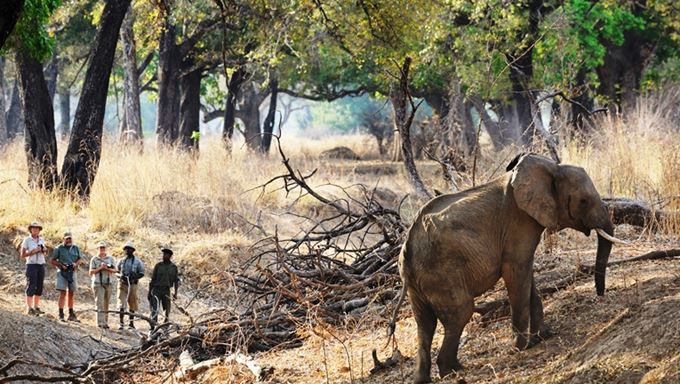 Best Foot Forward on a trek through Zambia’s South Luangwa National Park, Mary Holland checks in to new luxury lodges and experiences the unrivalled thrill of a walking safari.

INNOCENT SIMANGO and I had been walking for no more than an hour when he suddenly held up his hand. This meant I should stop. Immediately. The guide placed a finger to his mouth, then pointed to the dry riverbed ahead. Along the sandy bank, a half-dozen African wild dogs were hunting, their large, round ears alert. I held my breath and watched in awe until they vanished into the bush.

“They’re always moving and hunting,” Simango whispered. “It’s much harder to get a sighting like this from a vehicle.”

It was the first morning of my walking safari through Zambia’s South Luangwa National Park, and I couldn’t believe I had logged a rare encounter with my favorite animal (and an endangered species no less). Traveling on foot, I had expected far less dramatic sightings, such as tamarind trees, scarab beetles, and other things that can be missed while zipping by in a Land Rover. 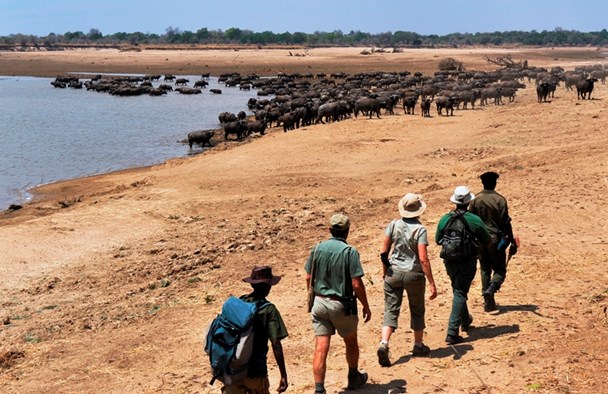 But I should have anticipated remarkable encounters. This was, after all, the very place where the walking safari was made famous by conservationist Norman Carr in the 1950’s. Since then, the 3,500- square-mile park has become a favorite destination among intrepid travelers looking to explore the wild without barriers. Historically, most accommodations in this corner of Zambia have been modest. That’s beginning to change, thanks to the opening of three luxury lodges.

While I was eager to experience the newer properties, my journey began at one of South Luangwa’s classic camps, Kakuli doubles from $830 per person, all-inclusive). Since it opened in 1950, it has been a go-to for the adventurous thanks to its multiday bush walks and overnights in open-air star beds. Simango and I arrived at the camp after our nine-mile walk and were welcomed by the smell of sausages cooking over a fire. I took off my shoes, dug my toes into the dirt, and watched as hundreds of stars emerged. Later, with only a mosquito net between me and the wilderness, I fell asleep to the distant roar of lions. 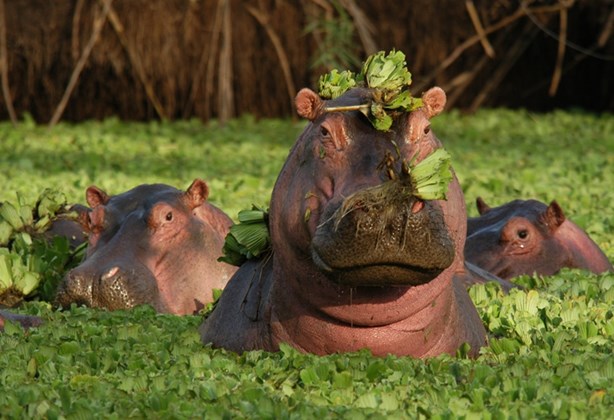 I awoke the next morning ready to take on a day of trekking with Jacob Shawa, one of the area’s most famous guides. We dipped under thorny trees, trailed hippo tracks along the river, and passed crocodile nests tucked under sandbanks. Even Shawa, who has been leading safaris for 17 years, seemed elated. “Don’t you love it here?” he asked, as we watched a flock of carmine bee-eaters near the Luangwa River. I did love it, in part because we weren’t jockeying with other groups or vehicles for the best sight lines. Everything felt more visceral from where we stood.

We arrived later that afternoon at Shawa Luangwa Camp; doubles from $550 per person, all-inclusive), which sustainably-minded Green Safaris opened last year. It’s named for the guide, who handpicked the lodge’s riverfront site where five A-frame tents are tucked on elevated platforms among the sausage trees. Mine felt like a cozy nest, with an earthy color palette and a sunken bathtub from which I could spot hippos in the river below.

The next day, I traded my walking sticks for one of Green Safaris’ solar-powered e-cruisers and made the 60-mile journey southwest to Sungani Lodge; doubles from $1,250 per person, allinclusive). The new camp claims a stretch of land that had been neglected for more than a decade and plagued by poaching. 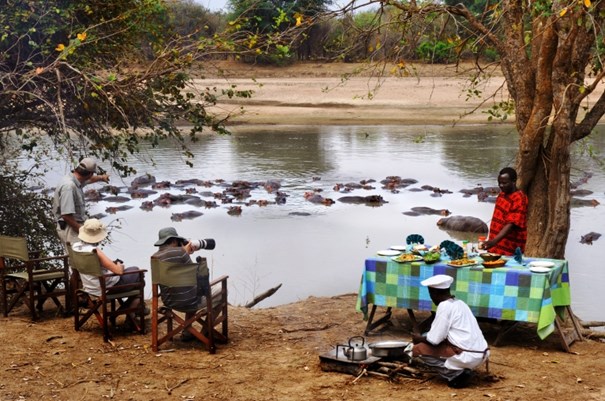 “Everyone told us not to build here,” said Zimbabwean guide Michael Davy, whose family owns Sungani. The area needed serious work—the grading of rocky roads, the installation of tsetse-fly catchers, and an investment in antipoaching measures—all of which the family was willing to do.

Working with park rangers, they helped eliminate poaching and built a seven-room lodge that would bring tourism back. “When we first came here, we didn’t see a kudu for two years,” Davy said. Now it’s a different story. During a brief drive, we passed six of the animals, their beautiful horns poking up through the bush.

The next morning, I headed back across the river to Puku Ridge; doubles from $767 per person, all-inclusive), which reopened last year after a major overhaul. From its perch on top of a hill, the camp offers a bird’s-eye view of wide-open plains where zebras and baboons graze. Similarly impressive: the eight tents, all of which feature large decks with plunge pools and star beds.

For all its bells and whistles, Puku Ridge excels at the simplest of thrills: the classic bush walk. It was still dark the next morning when my guide, Abel Banda, woke me for a seven-mile trek. We traced the banks of the river as the sun climbed in the sky and changed the landscape from dark gray to vibrant gold.

Then, suddenly, Banda paused and raised his hand. From the brush ahead of us came a bark, and then we saw them: those unmistakable ears. Twenty-one dogs trotted into a clearing, dragging their victim, a puku antelope, along with them. They moved swiftly, disappearing as quickly as they had arrived. It was impossible to follow them, but the flash of excitement was enough to make my heart do somersaults. After they were gone, I looked around. There were no roads, no cars, not a single other traveler around to see this moment. It was all mine.