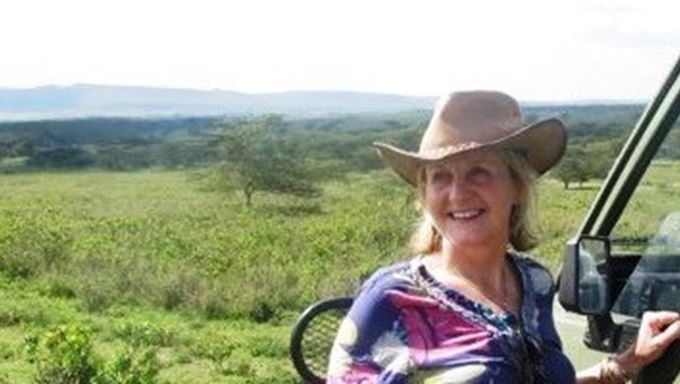 Anthea (Aggie) was born in Nakuru, Kenya, and her earliest memory is the sharp sting of red ants on legs and riding on her father’s polo ponies. The family moved to a farm in the beautiful Drakensberg Mountains of South Africa, with rivers to swim in, San paintings on the rocky outcrops above and the occasional snowfall for tobogganing on tin trays!

Next came the farm in Zimbabwe, and camping trips to the sands of Gonarezhou National Park - magical elephant country and baobab trees. Through the wartime it was back from boarding school at weekends, with a loaded .45 pistol under the pillow.

After school and a six month journey through East Africa, Aggie worked as a management trainee in the Savoy Hotel London, did a spell in Meribel as a chalet girl, then moved back to Kenya, where she ran Island Camp at Lake Baringo. Marrying a diplomat meant leaving Kenya and a posting in Hong Kong where she worked with the Hong Kong Cancer Fund.

Then  on to Shanghai, where she helped set up a joint venture foster care charity for Chinese orphans. During her years in the Far East she travelled widely, riding through the Heavenly Mountains of Xinjiang (on the Kazakhstan border) and in Inner Mongolia (while her husband joined the first ever crossing of the Taklamakan Desert) walking in Tibet, boating through the Sundarban delta in Bangladesh, and skiing in South Korea.

Back in the UK, she spent five years working in a start-up, high-end travel company, before joining The Explorations Company to focus more on Africa.

Waking at dawn under a mosquito net beside a stream on the edge of the Nguruman Escarpment in Kenya. The hadada ibis’ mournful cry from the thorn tree the morning after my father was laid to rest. Cooking Christmas lunch in a dried up ‘lugha’  (riverbed) in the Matthews Range, North Kenya. Water skiing in view of hippos and crocs on Lake Baringo.

The silence, stars and sand dunes of Namibia. Washing in an icy stream after riding in China’s Heavenly Mountains. Sharing goat curry with Wilfred Thesiger in his hut in Maralal.  The smell of quenched red earth after rain anywhere in Africa.