Which of Japan's privately guided garden tours make the top 10? 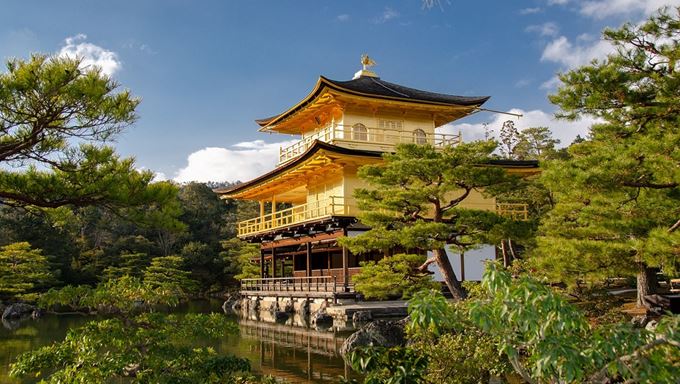 Traditional Japanese gardens are renowned all over the world for their variety, philosophy and exquisite beauty. Through privileged encounters with experts, you can learn so much about the secrets of Japanese Gardens including their designs and purposes.

Although landscaping and garden design is not one of my prime areas of interest, I particularly admire the spiritual and cultural aspect of Japanese Gardens. Often inspired by Zen, these meticulously designed spaces offer a pristine sanctuary for mindfulness and contemplation while celebrating the Japanese culture’s deep connection with nature.

It is believed that the first garden in Japan was created on the island of Honshu around 600 A.D. These traditional gardens are created full of symbols and allegories and usually feature key elements of stone, water, islands and bridges, vegetation to highlight different seasons, hills, lanterns and buildings such as pagodas, tea houses and pavilions. 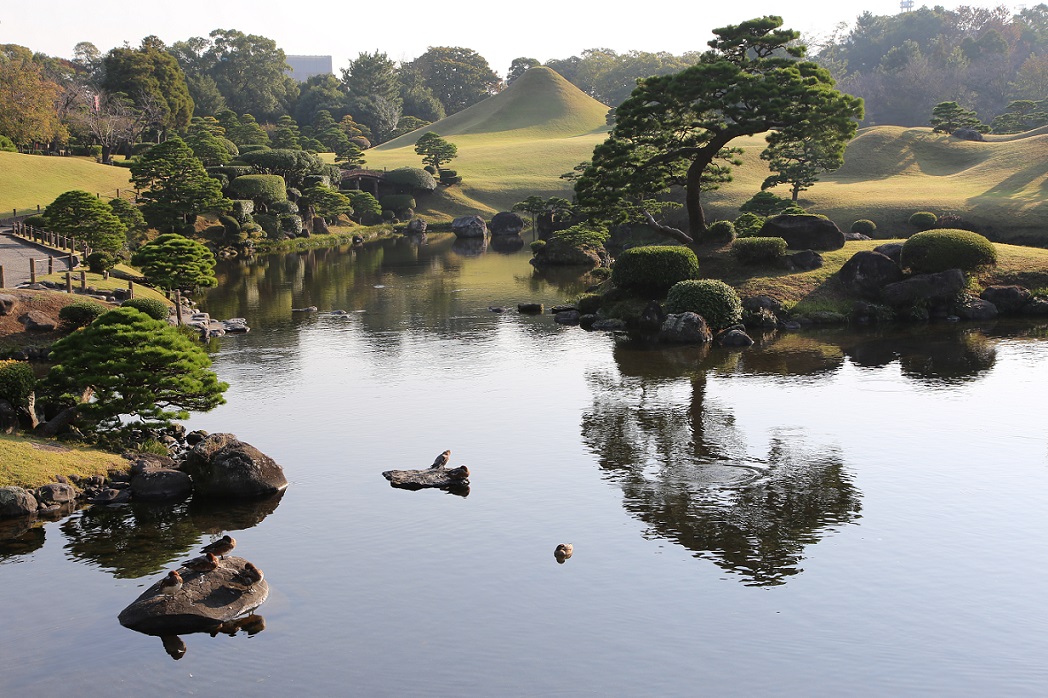 From rock, moss, landscape and contemplative, each type of garden was created for a specific purpose such as entertainment and relaxation by feudal lords, strolling by the emperors and royalty, or for spirituality and meditation for the monks.

A visit or tour as part of your luxury holiday to Japan can elevate your experience and understanding of Japanese culture. I highly recommend you explore these with a private, expert local guide who will enlighten you with all the aspects of the history and design of such gardens, making for an exquisite experience. Featured below are my top 10 favourite gardens and garden museums across Japan that will allow you an in-depth discovery of Japan’s love and respect for nature. 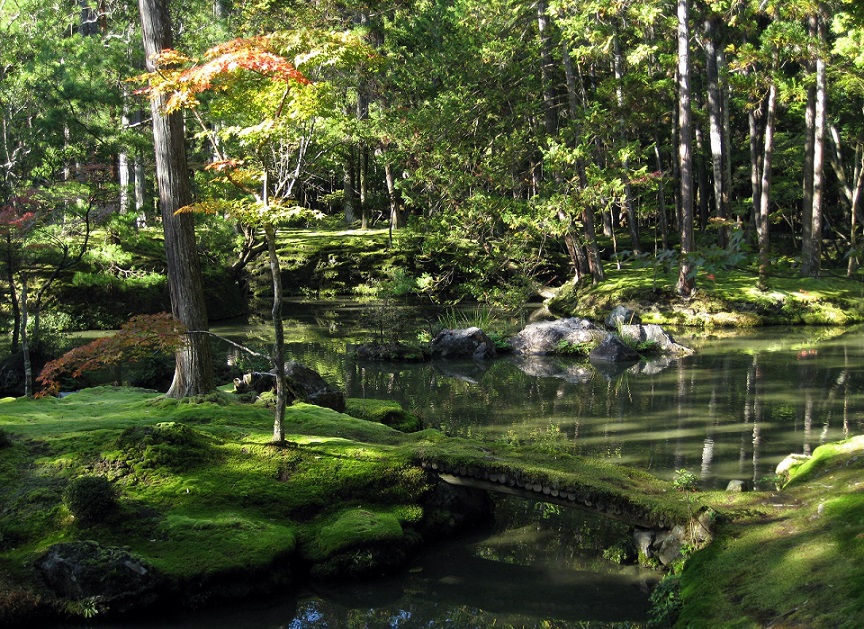 A hidden gem amongst Kyoto’s innumerable gardens and arguably one of its finest, visiting the garden of Saiho-ji is like stepping into an enchanting fairy-tale. Set in the picturesque Arashiyama mountains to the west of Kyoto and featuring more than 120 types of moss, this unique UNESCO World Heritage Site is popularly known as the Moss Temple or Koke-dera.

Saiho-ji’s garden was originally created by the revered Zen priest Muso Soseki in 1339 when the temple was renovated and converted into a Zen temple. Saiho-ji has served as the inspiration for many of the city’s famous temples including Kinkakuji – the Golden Pavilion and Ginkakuji – the Silver Pavilion. 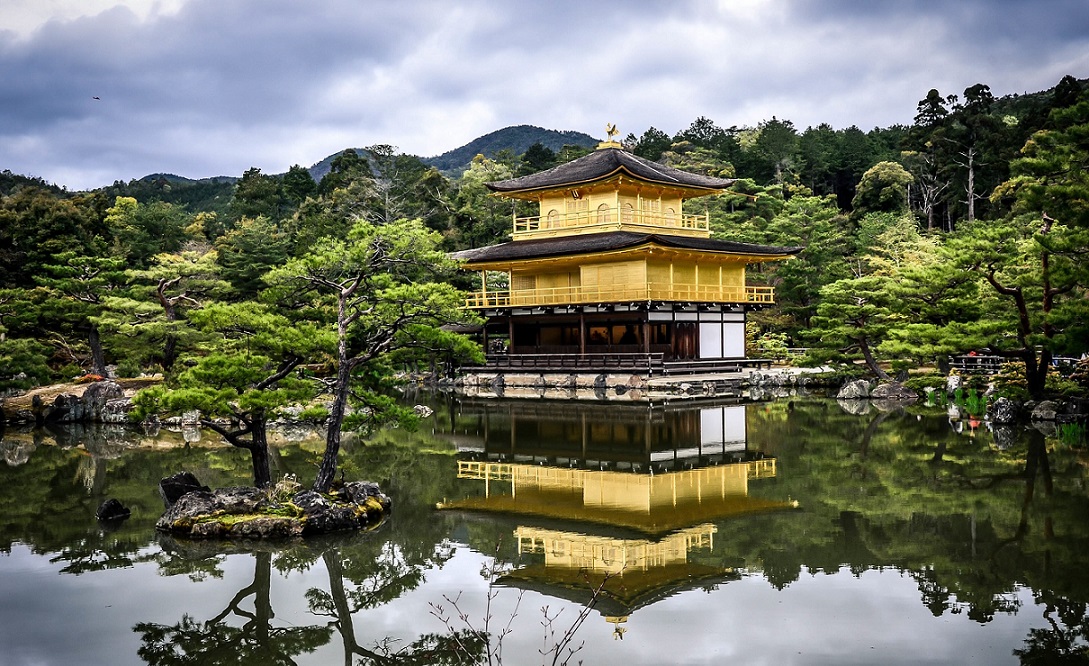 Visiting the temple and its garden during your holiday in Kyoto requires a good amount of luck, as advance reservation is required by postal mail and visitors are selected using a lottery system. For the privileged ones who manage to secure their reservations, the visit is truly spiritual and magical, for every visitor to Koke-dera is invited to participate in the chanting and copying of Buddhist scriptures in the main temple.

After the ritual, you can spend time strolling through the mystical garden, admiring the lush green of the velvety moss. The best time to visit this garden is either during monsoon or autumn with the latter being my favourite season when the contrast between the bright red and orange maple leaves and the lush green moss is just stunning. 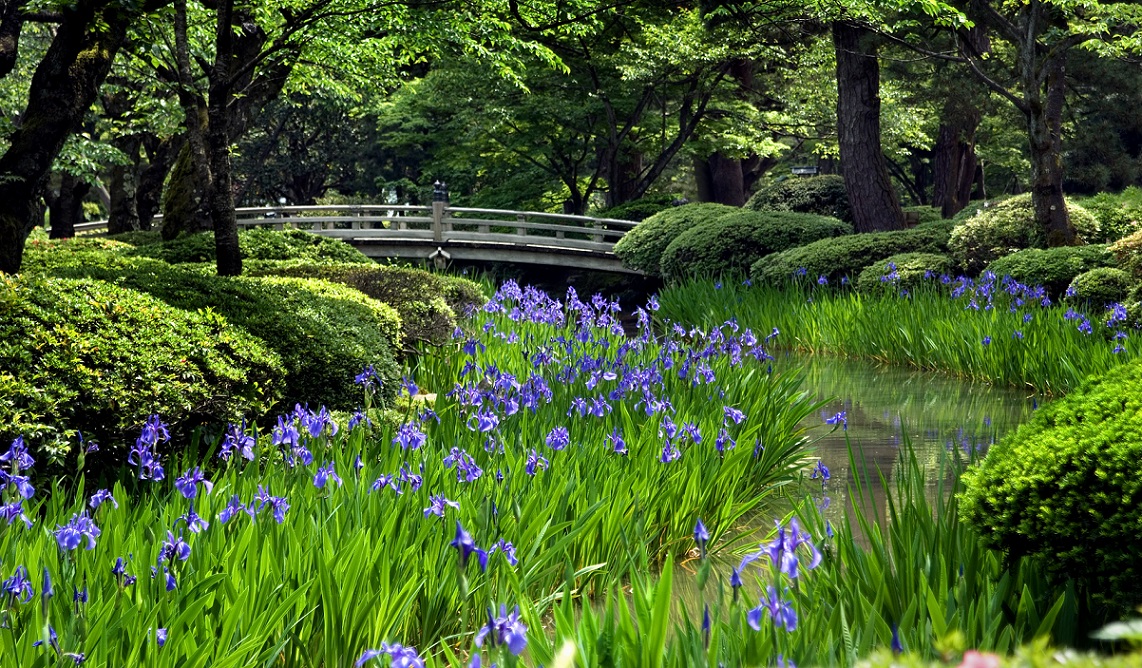 Touted as one of the three most beautiful landscape gardens in Japan, Kanazawa’s Kenroku-en masterfully showcases the harmonious coexistence of the six Chinese attributes of perfection, evolving as the different seasons unfold. Built in the Edo period for the ruling Maeda family, Kenruko-en used to serve as the outer garden of the Kanazawa Castle until it was turned into a public garden in 1871.

One of its iconic features is the large pond with several panoramic views around it and it is also home to the country’s oldest water fountain. The garden is filled with an incredible variety of plants and trees that maintain its beauty all year round. 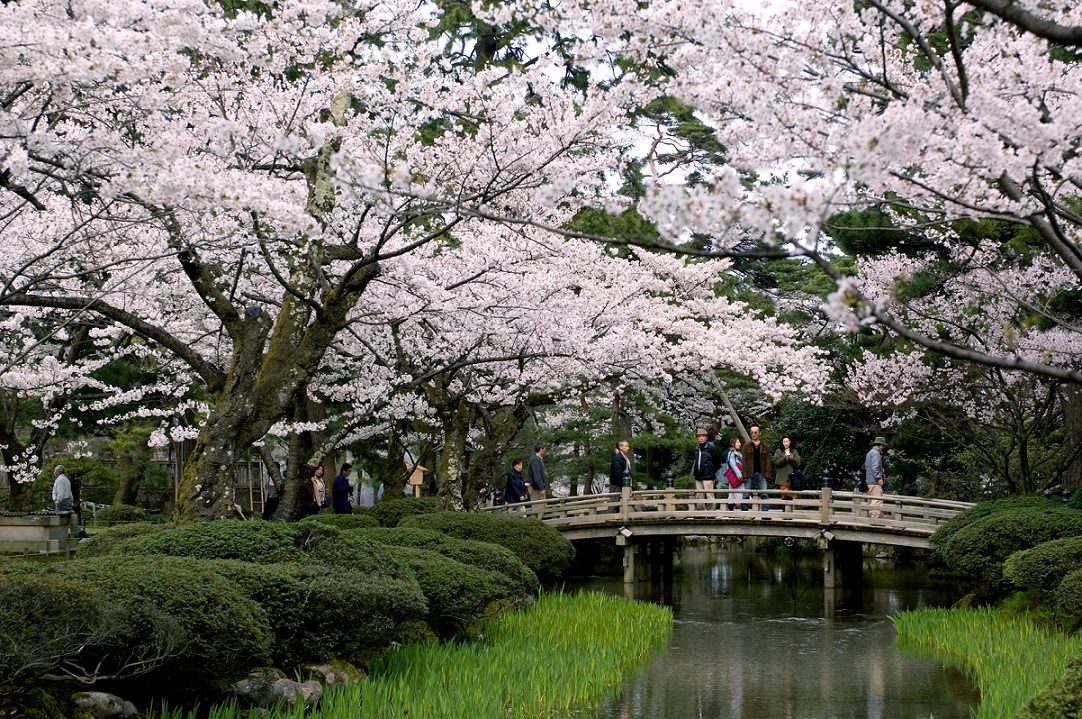 In spring, you could admire plum and cherry blossoms; during summer, you would be rewarded with an unparalleled bonanza or summer flowers and lush greenery; and in autumn, you can see the amazing hues of red, orange, and yellow on the countless cherry and maple trees.

Kanazawa with its remarkably well-preserved samurai and geisha districts, bustling seafood market, incredible art museums and exquisite heritage of gold-leaf artefacts is one of my favourite cities in Japan to visit and makes a perfect destination for a luxury holiday. 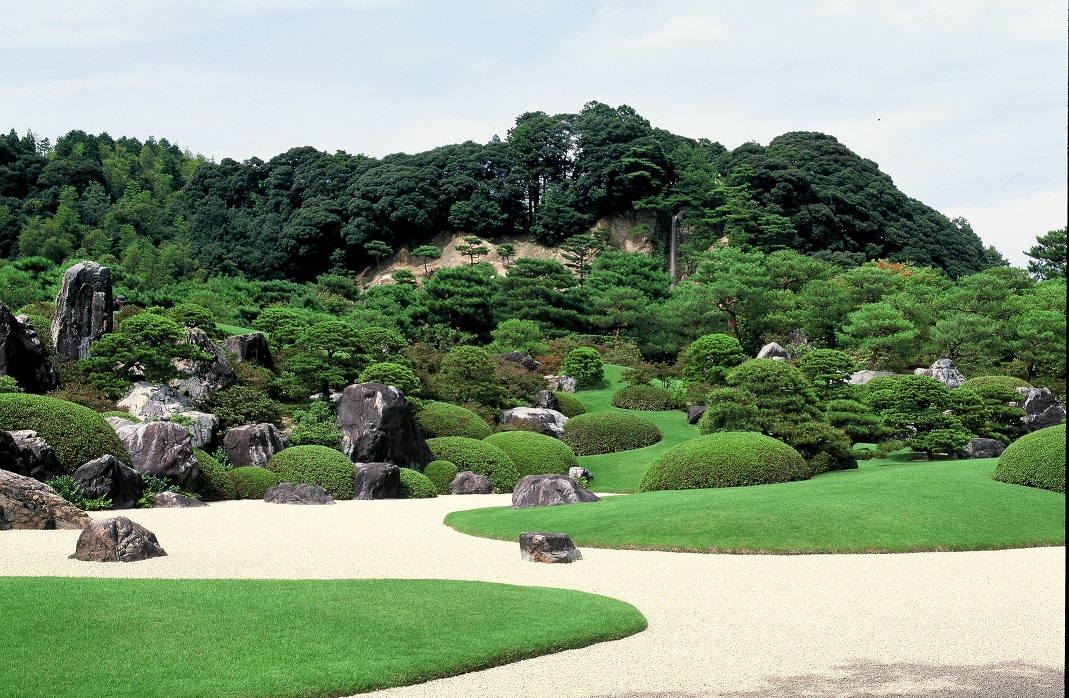 Described as a “living Japanese painting” and considered to be the best garden in Japan by the Journal of Japanese Gardening, this mesmerising complex was created by Adachi Zenko, a textile merchant with a passion for landscape gardening and Japanese art. Comprising of an art museum surrounded by a variety of traditional Japanese gardens, the museum is a tribute to Adachi’s creative expression, as he believed that gardens are like a picture-scroll.

Opened in 1980, the award-winning garden is spread across a vast area of 165,000 square metres with six gardens showcasing Japan’s seasonal varieties including the Dry Landscape Garden, Moss Garden, Tea Garden, Pond Garden as well as the White Gravel and Pine Garden.

Being dedicated works of art, the gardens can only be admired from the main museum building. It is such a unique concept, showcasing a perfect harmony between the indoor and outdoor displays, almost like enabling the viewers to explore a Japanese painting from the inside. Adachi’s collection is considered to be amongst the finest in Japan and includes the work of many notable artists such as Yokoyama Taikan, Takeuchi Seiho, Tomioka Tessai and Uemura Shoen just to name a few. The museums is particularly well-regarded for its collection of Taikan’s work. 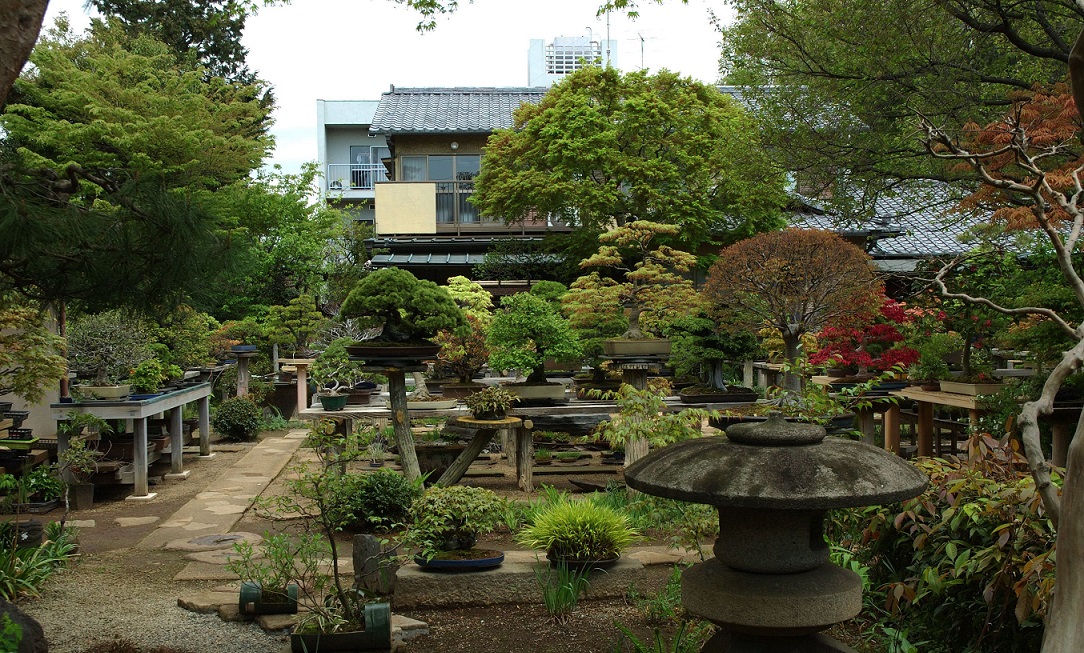 The art of bonsai was introduced in Japan from China over a thousand years ago and it has become an intrinsic part of Japanese culture. Considered a national treasure, bonsai has become synonymous with the Zen philosophy of wabi-sabi, which emphasises “understated elegance” and “taking pleasure in the imperfect”.

This living art form has become famous world over and if you wish to learn about various styles and techniques that go into creating a bonsai masterpiece, the Omiya Bonsai Art Museum and Omiya Bonsai Village located just north of Tokyo are amongst the finest places in the country. 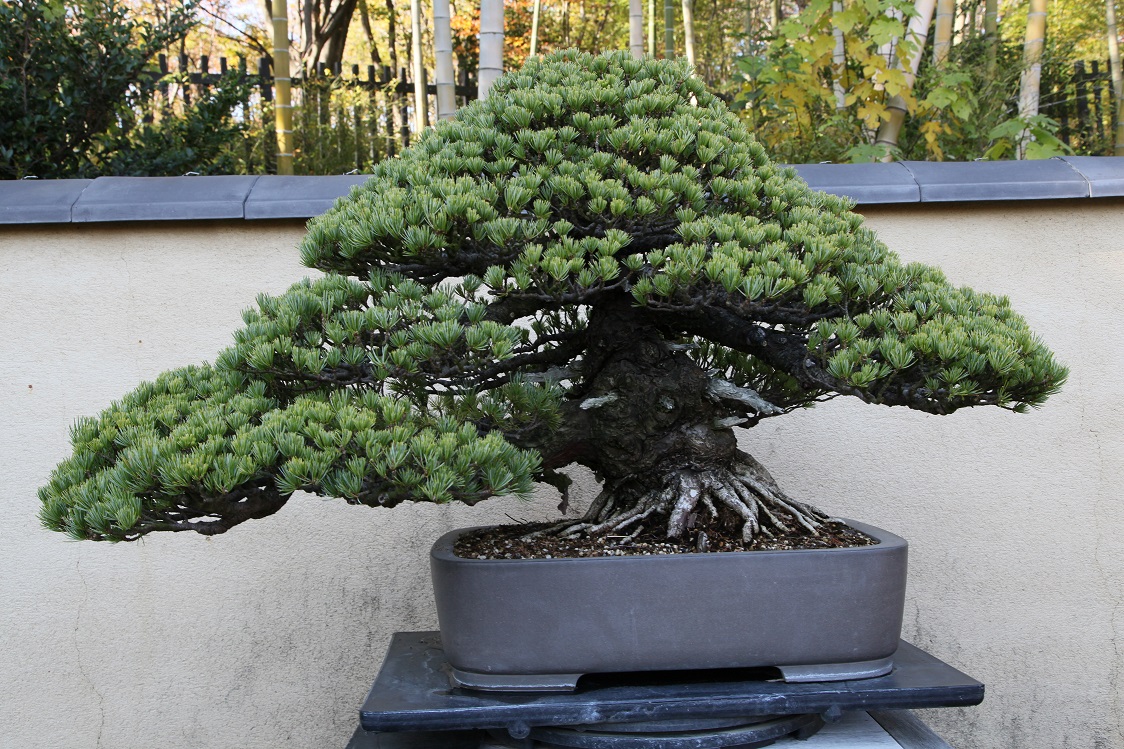 I find the bonsais utterly fascinating, first admiring them from above as an artform and then letting your imagination run wild by transporting yourself into a miniature world, like Gulliver’s Travels or Studio Ghibli’s The Secret World of Arrietty! The Omiya Bonsai Art Museum is the world’s first museum solely devoted to the art of bonsai. The museum has an impressive collection of over 120 masterpieces with some over 1,000 years old!

Depending on the season, a wide variety of bonsais are on display throughout the museum in indoor and outdoor spaces. The village is filled with bonsai nurseries where you can spend time with the experts and learn how to grow and take care of bonsai works. 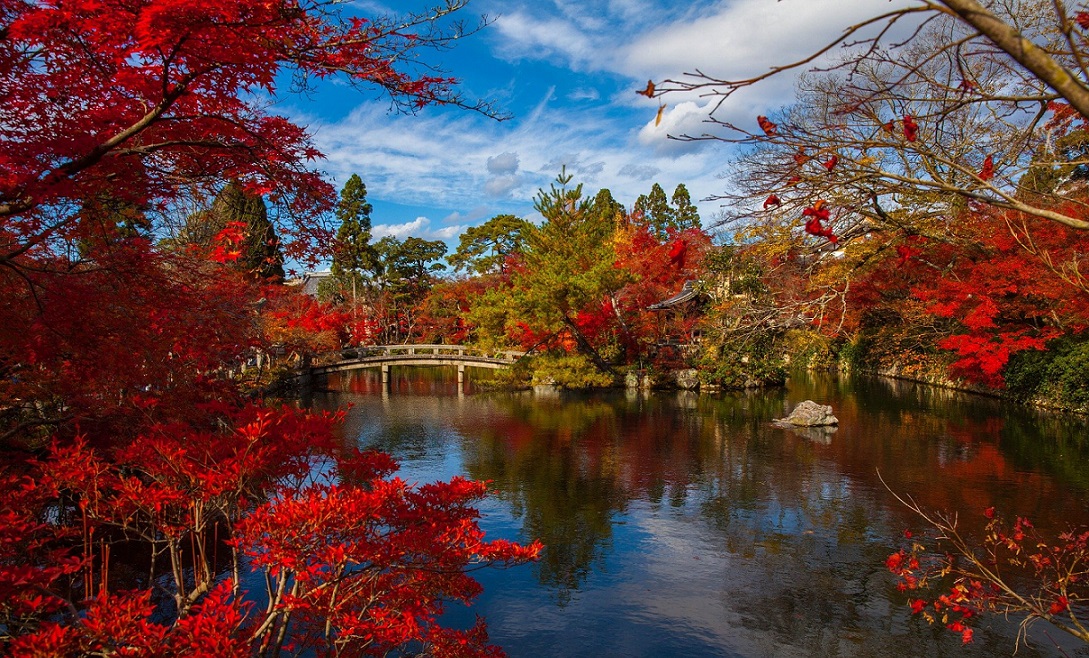 Formerly a private villa in the Heian period, Tenryu-ji is one of the oldest living temples in Kyoto. This famous Zen Buddhist temple is renowned for its beautiful garden featuring a pond stroll. Its central pond is surrounded by maple trees, which make it a particularly good place to visit in autumn to see the stunning fall colours.

If you are a foodie like me, I would highly recommend trying the Zen Buddhist vegetarian cuisine known as shojin ryori at Shigetsu restaurant located on the temple grounds. 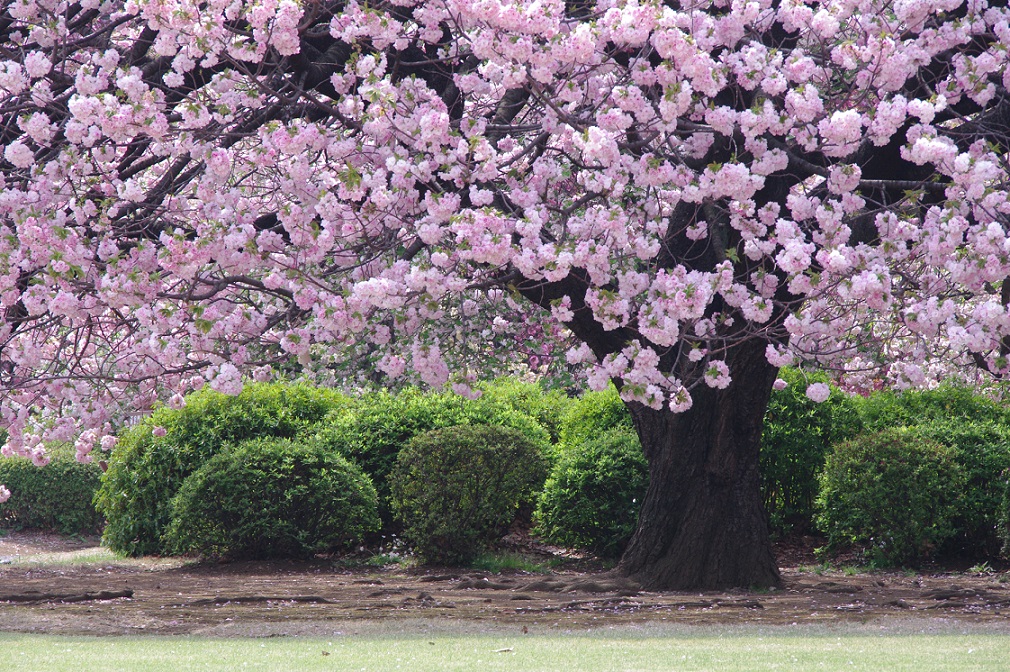 This large public park is one of my favourite places in Tokyo to enjoy the cherry blossoms. Originally designed during the Edo Period, the royal park was almost completely destroyed during the Second World War and was rebuilt and reopened as a public park in 1949. There are many interesting features within the park including a traditional Japanese landscape garden, a French garden full of roses, an English landscape garden, sprawling lawns and a tropical greenhouse.

For me, the main attraction of this park remains the cherry blossom, as there are more than 400 trees that blossom between late March and early April turning the park into one of the city’s most popular and stunning hanami spots. 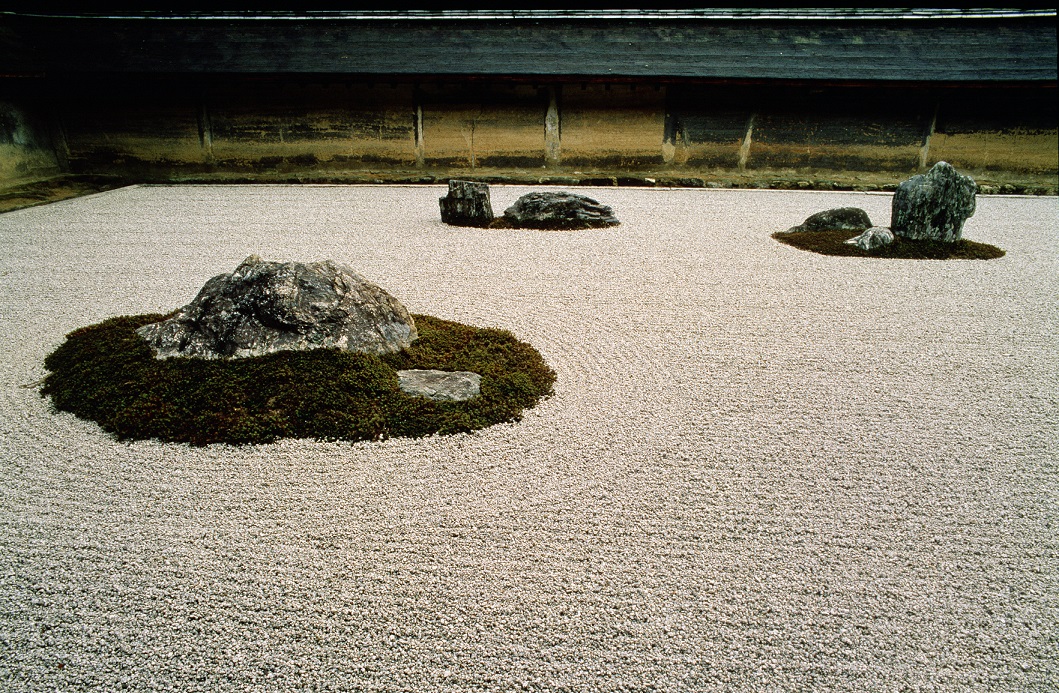 Arguably the most famous rock garden in all of Japan, it is astonishing that this masterpiece has been created using nothing but clay walls, raked sand and just fifteen rocks. Its real beauty is in its simple yet highly complex design and the delicate balance of mass and void, and the clever use of numbers and groups.

Another fascinating aspect is that it is impossible to view all the fifteen rocks simultaneously from any angle of the garden! The current garden was recreated in 1797 after the original temple was destroyed in a fire and according to a print published in 1799, it has remained unchanged since that time. This is one of my favourite highlights of Kyoto. 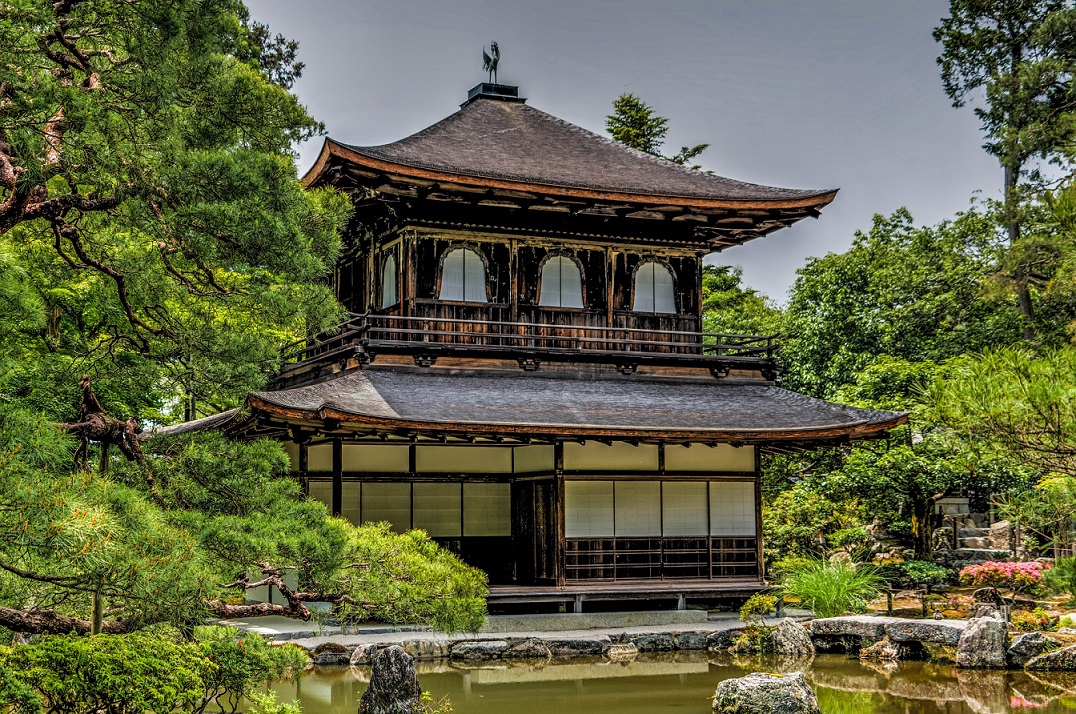 This iconic temple is one of Japan’s most famous and popular sights, and although it is not as famous as its original inspiration Kinkaku-ji (The Golden Pavilion), I admire Ginkaku-ji for its stunning gardens, which consist of a beautiful moss garden and a dry sand garden called the “Sea of Silver Sand”.

Located on the eastern hills of Kyoto, this tranquil and picturesque Zen temple was initially built by Ashikaga Yoshimasa, the grandson of the founder of Kinkaku-ji, as his retirement villa. 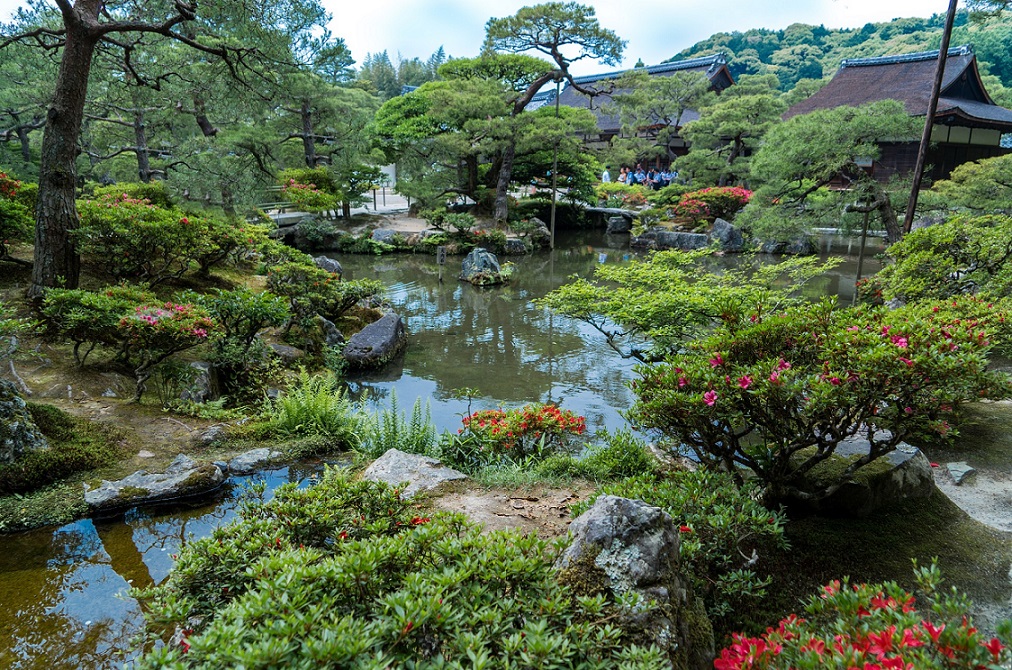 Dautoku-ji along with its numerous sub-temples is one of the main temples of the Rinzai school of Zen Buddhism. Of all the sub-temples, one of my favourites is the Daisen-in, which served as the training ground for the famous tea master Sen no Rikyu. If you are interested in learning more about Zen Buddhism, this is one of the best places in the city and you can even engage in a highly insightful and captivating discussion with the temple’s charismatic priest.

Daisen-in has five beautifully maintained gardens that convey the Buddhist philosophy of one’s journey through life. Other fascinating sub-temples are Obai-in and Koto-in, which have extraordinary gardens that are particularly stunning in autumn with the maples at their resplendent best. In fact, Obai-in only allows visitors for a short period of time in November and the temple remains closed to general public throughout the rest of the year. 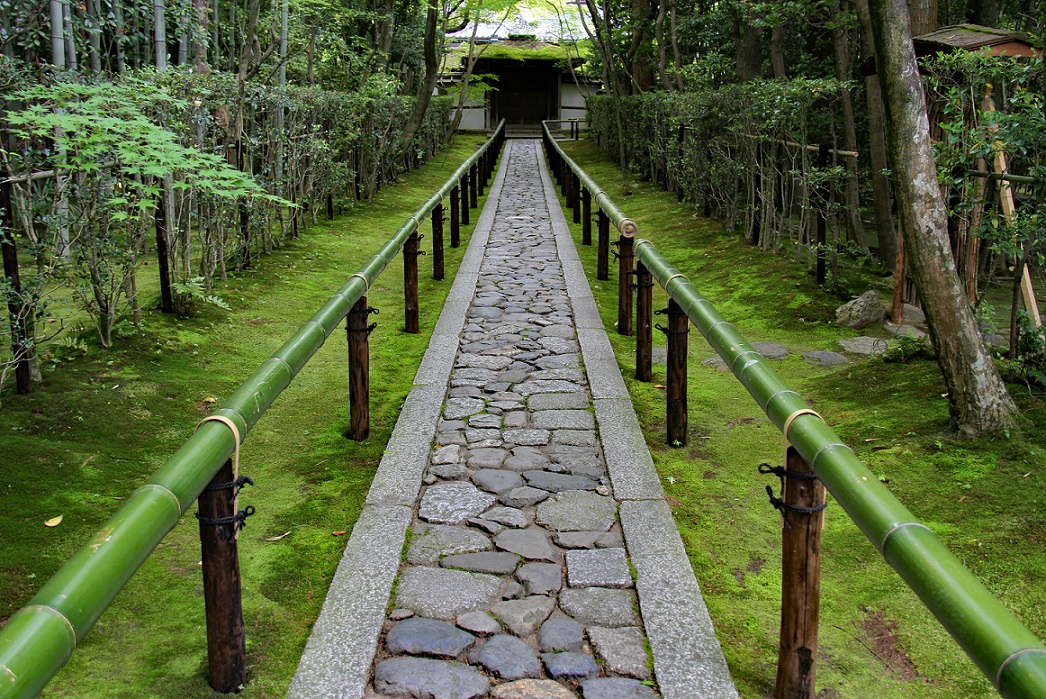 Katsura Rikyu (Katsura Imperial Villa) is the former residence of the Katsura Family – members of Japan’s Imperial Family. Although visiting this garden is quite tricky, for those particularly interested in traditional garden design it is considered to be one of the finest examples of a strolling garden in the country and definitely worth a visit.

The garden was originally designed for Prince Toshihito in the early Edo period and features various aspects related to the Japanese classic the “Tale of the Genji”. It is filled with exemplary architecture including four of the original tea houses along with beautiful garden features such as stone lanterns, gates, stone pathways and a large pond.

Taking a holiday to Japan without immersing yourself into one of the creative masterpieces above is like visiting Rajasthan in India without exploring one of its majestic palaces! I consider it an absolute essential feature of your vacation. Please do feel free to get in touch if you would like any more information about holidays to Japan or to wider Asia. Or, if you would just like to dream for now, you can do so at our Video Library.

Images by kind courtesy of: