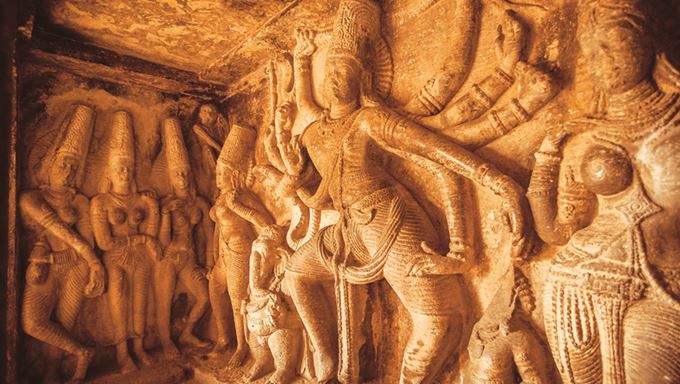 The Tungabhadra River cuts through the boulder-strewn landscape of Hampi, in the South Indian state of Karnataka, like a jigsaw. Twisting back and forth between giant rocks, it has always been a lifeline for the people of this landlocked village - which is why so many of Hampi’s spectacular ruins stand right along its banks. As my family and I approached the river, the sun burning bright overhead, our nine-year-old son, Apollo, pointed to a circular bamboo raft tied up near the shore.

“We’re not going across in that, are we?” To say that the raft appeared unseaworthy would be an understatement. The bamboo vessel, known as a coracle, resembled an overgrown fruit basket. No more than six feet across, its rim sat just a few inches above the water.

“No, no,” my wife, Courtenay, reassured Apollo and his seven-year-old brother, Asa. “We’re taking a real boat.” Our guide, B. Virupaksha - Viru for short— eyed us with a smirk. “Don’t you want to travel like they did in ancient times?” he asked.

Carefully, we lowered ourselves in and edged down into the bottom of the raft, fearful of flipping the whole thing into the water. It felt like we were sitting in the river. But the boat was surprisingly sturdy, and before we could voice any more opposition, the boatman gave a push and sent us spinning downstream, tugged by the current of the Tungabhadra.

Soon we were passing ancient Hindu shrines overlooking the water, each carved from the same yellow granite as the boulders lining the riverbanks. Inside one cave-like space, a group of women in brightly colored saris was gathered in prayer, a smudge of turmeric powder on each of their foreheads.

In another, several sadhus, or holy men, chanted softly, their words merging into one long, soothing note. As we floated by, we could smell the woody fragrance of temple incense in the air.

IN THE 15TH AND 16TH CENTURIES, Hampi was the capital of one of India’s most prosperous empires, the Vijayanagara. While its rulers were later overthrown by more powerful forces, they left behind some of the country’s most remarkable monuments - many of which are still magnificently preserved. Littered around Hampi are stone market buildings, watchtowers, royal palaces, elephant stables, and too many temples to count. But until the 1960s, Hampi was unknown to anyone but Hindu pilgrims and British archaeologists. In 1986, UNESCO designated the monuments as a World Heritage site, but major excavations continue, and only today is the full extent of what was built there coming to be understood.

My family and I moved to New Delhi two years ago, when I took the position of South Asia bureau chief for the New York Times. Since then, the four of us have taken selfies in front of the Taj Mahal, lounged on Goa’s beaches, skied the powdery slopes of Kashmir, and spotted a tiger in Ranthambore. But Hampi is one of the most enchanting places I’ve visited in all of India.

Exploring it felt like plunging into a lost world. Looking out at the citadel’s delicately hewn temples, their golden stone peeking out from the rich green of the jungle, activates those synapses in your brain that say: discovery. Here, you can witness something as stunning as Machu Picchu, and have it virtually to yourself. But you might want to hurry. Until 2017, getting to Hampi usually involved a seven-hour drive from Bengaluru (Bangalore) on bone-jarring roads. But since reliable flights began operating to Jindal Vijaynagar Airport two years ago, you can do the trip from Bengaluru in about an hour.

Since we were visiting an opulent kingdom, we figured we might as well stay in an opulent palace - the Kamalapura Palace, a grand property opened in 2016 by the luxury chain Evolve Back. Each morning, Viru, himself a proud Hampi native, would meet us under the Vijayanagara-inspired arches of the hotel portico.

Viru, who comes from humble means, learned English as a boy by selling postcards to tourists. Twenty-five years ago, there were just a handful, he said, and most were backpackers. Now there are countless more - Americans, Europeans, Australians, Japanese, and, of course, many Indians.