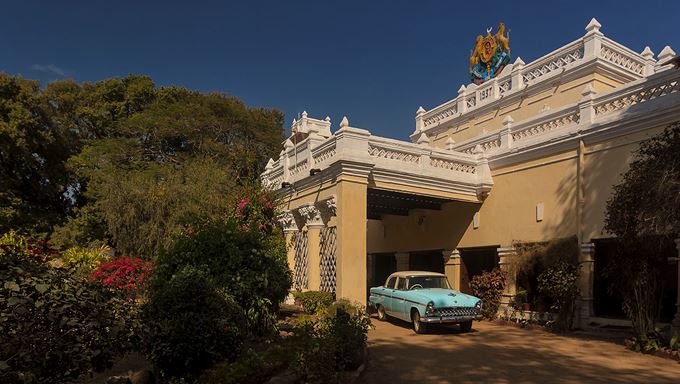 Even in a place as hugely diverse and mysterious as the subcontinent, this scene is way off the beaten track. Chhattisgarh, a microcosm of the beautiful complexities of old and new India, is one such corner. It’s a land of leopards, shamans, forest dwellers and animist beliefs, with a Hindu hierarchy and a robust royal family intent on leaving a legacy to the region.

You can stay as a guest of the Maharajah of Kanker at his family palace, two and a half hours south of Raipur. It’s a neocolonial residence, built in 1937, with six rooms in the right wing, now given over to guests, along with a further 12 rooms in outlying cottages.

Fronted by lawns and rambling bougainvillea, Kanker Palace is the family home of the erstwhile ruling family who can trace their ancestors back to the 12th century.

Built in 1937 the colonial bungalow was the residence of the British agent in this remote part of India who was the young prince’s guardian at the time, and is the royal family’s fourth palace, the others having been given up to become a temple, school and hospital.

The palace is far more like staying in an exquisite old home than a hotel; my bedroom boasts a high vaulted ceiling, a four-poster bed with a handmade quilt, a vintage gramophone and a candlelit bathroom, all adding ineffable character.

The suites, like the other rooms in the main building have double height ceilings and enormous fans that would have once been pulled by fully occupied punkahwallah. The rooms are decorated with traditional furniture, animal skins and hunting trophies, including ‘Henry’ a complete tiger who watches over guests in the sitting room.  There are some more recently added rooms and cottages which, though lacking the character of the heritage rooms, have air-conditioning.

Other areas within the grounds hint at a more affluent past; the former maharaja’s outbuildings are now a children’s nursery, the water body around a pleasure island is silted up and the ‘tiger den’ overgrown and almost in ruins. It’s all hugely atmospheric and your royal hosts absolutely charming, full of fascinating stories about the past, the lives of the people in surrounding villages  and enthusing with ideas for the future.

These acres are a bounteous garden of plenty: rice, ginger, cauliflower, spinach, radishes, carrots, onions, coriander, green chillies and tomatoes, as well as figs, guava, custard apples and mangoes of such celebrated sweetness that they are sold far in advance of their harvest.

Aside from enjoying the hospitality and old world charm, a stay at Kanker Palace is all about exploring this part of Chhattisgarh with a knowledgeable guide who accompanies guests to places of natural beauty and archaeological significance, but most importantly to villages hidden deep in the forests to discover the traditions and culture of the indigenous people.

Explore the tribal village of Bison-horn Muria Tribe and here experience the Bastar's significant 'Ghotul' dormitory system. You can also visit Narayanpur which is known for some of Bastar's finest handicrafts.