The best Family Holiday ever in beautiful Ladakh 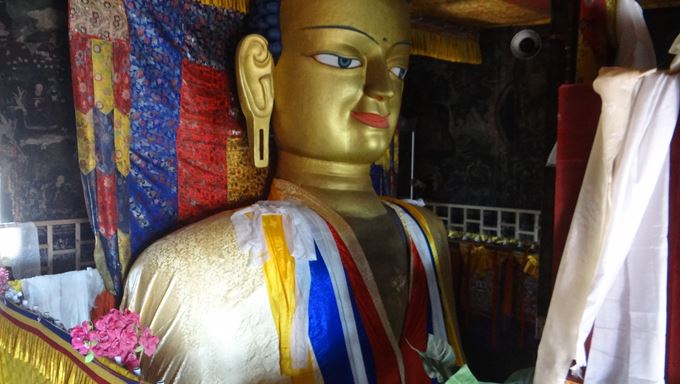 I recently enjoyed one of the best family holidays ever – to Ladakh in the northern part of India close to the snow-capped mountains near Kashmir. As a family we are very seasoned travellers and quite adventurous, however the closer our departure date loomed the more conscious and nervous we got particularly as we were now travelling with a 5 year old for the very first time. The suitability of this new journey and the likely standard of the accommodation along the way were high on our list. Would everything really be suitable for families with young children?

However any concerns we may have had quickly evaporated and I must say everything on this holiday was just superb and our children had a great time. The flight to Leh was magical, especially for the children who spent the entire time looking at the mountain ranges beneath the clouds, some had lush green vegetation, some were bare and snow-capped.

The landing at Leh is also very dramatic! You fly over these huge naked mountain ranges and then the plane drops steeply into the wide Indus valley, banks sharply past the crumbling towers of Spitok monastery before touching down at Leh airport – Kushok Bakula Rimpoche Airport to give it its formal name. You are transported to a different planet when you arrive at Leh.   I had read that it was often called ‘the broken moon’ however I could now appreciate why when we actually disembarked the plane.

A very cheerful person by the name Tashi met us at the airport and transferred us to a lovely house in the village of Stok. It was like something out of a fairy tale! We had a three storied house with cows on the ground floor, kitchen and dining on the first and really tastefully decorated rooms on the second floor with a terrace connecting them.

As we arrived at 7 am the children were hungry and while we were thinking what to order, a full breakfast with fresh fruits, cereal, homemade bread, apricot jam and choice of eggs was laid down before us.  It was one of the best breakfasts we have ever enjoyed as a family made even more spectacular by overlooking the tiny Stok village and the Ladakh range at a distance.

We were advised to spend the day in the property to acclimatise as you are in a short time transported to 3500 m.  Well that wasn’t tough as we spent hours sitting on the terrace trying to take in all the wonderful views, the stupas, the locals in the nearby fields and playing board games in the living room after a hot water bath. I must say that the Shakti village houses are very well equipped for children which was great.

After talking to our guide we had decided to visit a couple of monasteries the following day and some exploration around the village and a possible a bike ride.  We had a knock on the door at 7 am and greeted by an extremely cheerful staff member called Sanam who offered us a hot cup of tea and some biscuits. After breakfast, we drove to the see the monasteries at Shey and Thiksey that are only a few kilometres away from each other.

Perched on hilltops the views are breath-taking and it was interesting to meet the monks and to understand a bit more about Buddhism. Our children were fascinated by the extremely colourful thangka paintings on the walls and the massive statue of Buddha. They had never seen something like this before.

We visited the school which is run by the monastery and that was an eye opener for our children as they could see how simple the facilities were and how they studied and I am sure somewhere in their mind they realised how different the world is and how much they had in comparison to these children who were aspiring to become monks.  Unfortunately as we were travelling with children, we didn’t get to the Thiksey monastery early enough in the morning when at 6 am they immerse themselves in their daily rituals. I returned the next day on my own and as expected it was amazing experience. I would certainly recommend that to everyone.

We then moved to the village of Nimmu which was an ideal place for us to go on walks, cycle through the tiny villages and generally be a bit more outdoors. This was time for the children. We spent a few hours walking through the village when they could see people working in the barley fields or the lady of the house in her vegetable garden and the elderly happily discussing some important issues sitting on a bench next to one of the several stupas dotted around the village.

The great thing about Ladakh is that you can walk for half an hour or go on multi day treks. There are various options available to you and so you can really have a great time.  The children thoroughly enjoyed their bike ride from a tiny hamlet of Nhey to Nimmu.  We came cross a couple of villages and on several occasions went over rather splendid metal bridges constructed by the Indian Army to cross the River Indus.

Ladakh is all about enjoying nature, the mountains and the interaction with its cheerful people – and how can I forget the cuisine. We enjoyed the hot soup and the thukpas served with it. The children loved it as most of it wasn’t spicy or at least was made specially to agree with them.

We had planned to do some rafting on the Zanskar however, there was a landslide on the way to Scorpoche and therefore we unfortunately couldn’t get to the point where the raft had been arranged.  Sadly as a result we had to cancel the rafting experience however the drive through the valley looking down at rapids and the gorges along the Indus was thrilling and perhaps in hindsight the better option!

There were couple of excursions however that we didn’t want to miss – the drive to Khardung La (the highest motor-able road in the world at 5400m) and the visit to the cobalt blue Pangong Lake.  Both are long road journeys but the driver was extremely careful and we made several photo stops. Although we spent a long time in the car, the scenery around us was so amazing that before we knew it we were at our destination.

Everything looks tiny when you get to Khardung La. The first 40 minutes or so are on tarmac roads however after South Pullu where you submit your permit to visit the pass, the road is very bumpy as you pass through the snow-capped Ladakh Range and it’s a 3.5 hour journey to the summit. The children were thrilled to see the men from the Border Security Force in their white outfits and anti-glare glasses.

We visited the café to have a hot cup of black tea before returning to base camp for a sumptuous meal.  It’s a slightly longer drive to Pagong and therefore we decided to spend a night at the camp near the lake. My eldest could not believe that only 20% of the lake was in India and the rest was in China.

The first glimpse of Pangong is of the serene, bright blue waters and rocky lake shore. The sheer beauty of Pangong Lake is down to the fact that the lake displays multiple colours ranging from shades of blue, green and even sometimes appearing reddish. The rugged Trans-Himalayan Mountains in the background make for a stunning panoramic view. During the winter months from November to March end, the lake is completely frozen. Pangong often called the lake of changing colours is one of the three high altitude lakes at Ladakh and the rare black necked cranes can be spotted here.

Sadly that was the end of our incredible family holiday to Ladakh. We had an amazing time staying at wonderful village houses, walking, cycling and being driven through spectacular scenery.

Some of the future destinations on our wish list are Kerala which is also a perfect family destination and an introduction to the exotic delights of the subcontinent. You can get some more insights about these here.