Fishing for the Mahseer in the Himalayas 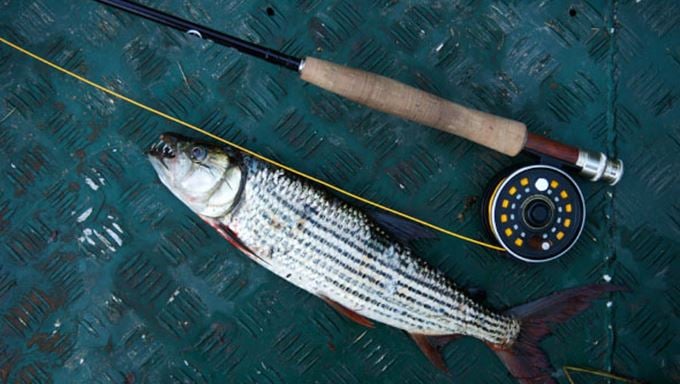 The Explorations Company offer some amazing Mahseer fishing in the Himalayas – both for the fly and the angler. Fish on the Saryu River where as the Ramganga is suitable for fly fishing.

Some of the preliminary mentions of large Mahseer caught on rod and line were back in 1870 by Mr. Sanderson, author of Thirteen Years Amongst the Wild Beasts of India, with the landing of a Mahseer which was said to be over 130 lbs.

Fly-fishing for the Mahseer in the Himalayan Rivers was very common during the times of the British Raj in India as it was a fine alternative to Salmon fishing - something most expatriate anglers were used to back at home. At that time they used large dark flies, mostly black in colour, which looked like minnows and grass hopper like flies and often hooking live grass hoppers onto the fly hook and cast with the help of a fly line.

Reading old literature from the pre and the post British Raj period, one generates a fair bit on interest into the prospects for fly-fishing in the Himalayas, especially with so many rivers and tributaries to choose from and such remarkable fly-fishing terrain.

Mahseer have been caught from almost all of the main river systems that drain the Northern Ranges and in their productive tributaries - which include the Saryu, the Mahakali, the Ramganga, the Beas, the Ganges, the Bhagirathi and a few others. There is a misconception that fly-fishing for the Mahseer is done better in crystal clear spring fed rivers rather than in glacial rivers - we have had equally good fishing on both types of rivers.

The Western Ramganga River averages fifty to ninety feet wide for a major part of the year. It is hard to imagine a river this size that can produce trophy fish in the fifty pound range. Just like any other classic Golden Himalayan Mahseer river, the Western Ramganga also offers terrific opportunities for using nymphs, swinging flies down and across for these monsters to take as well as fishing dry flies.

The Western Ramganga also lends itself to a fair number of sight-fishing opportunities for these majestic fish. A sight fishing pursuit for the Golden Himalayan Mahseer is perhaps the ultimate in the world of freshwater fly-fishing. We call these fish "the freshwater equivalent of a Permit"

Undeniably, one of the most effective and exhilarating ways to fish these vast glacial rivers is by rafting down them, with all supplies for a multi-day trip over a period of days, accessing the remotest spots with much ease and without getting into the even more complicated logistics and time wastage of trekking.

The fishing is based on a fifteen mile stretch of river; floating, walking and wet-wading. We've designed the schedule to fish this entire section as efficiently as possible and guests lodge in two to three separate camps during the course of their stay with us.

The Saryu River offers beautiful fly-water and is a relatively easy to fish. It offers just the right volume for the use of both double and single handed fly rods. This river rewards a variety of presentation including skated dry flies and poppers. In the warmer months the Golden Himalayan Mahseer take in rapids too, which is a really exhilarating experience!

Journey with us through some of the remotest corners of the Indian Himalayas in search of the wild and exotic Golden Mahseer! Experience some of the oldest and richest cultures of the world, in areas that still remain lost in time. Experience world class Mahseer fishing and flavour some fine Indian cuisine along with the world class hospitality of your experienced hosts and manifest a sporting journey of a lifetime.